This document contains an explanation on how to build entire operating system from source.

The project consists of two repositories:

The system root directory (sysroot) is a concept used in cross-compiling. Everything in this directory is written to the ramdisk, which is mounted as the root folder of the filesystem when the OS has started.

When cross-compiling libraries and applications on your host system, the headers and libraries from within this directory are used. This is required to seperate the host from our target.

If you want to use a different folder, see the "Tips" section below.

There are some pre-requisites that you need to install on your host system. Install the following dependencies:

You may need to export AUTOCONF=autoconf2.69 depending on your installation.

The recommended way of building on Windows is using WSL (Windows Subsystem for Linux).

There are quite some prerequisites, so probably setting up a Linux VM is easier. The least that has to be done to get it working on OS X is to install GCC, build libmpfr, libgmp and libmpc from source and prepare the environment properly.

Usually all folders contain a build.sh which is a simple bash script that builds this specific part. Multiple targets can be specified:

The build.sh in the root directory will attempt to build all components in the correct order. For building yourself, the dependency order is:

The ISO image is generated to the main folder as ghost.iso.

libapi is the lowest layer library that provides wrapping of system calls. On top of this is the libc that utilizes libapi. libuser builds on top of these and provides high-level functionalities. 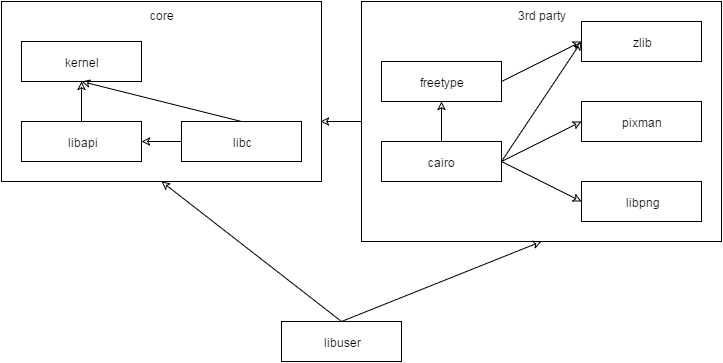 To install third-party libraries, it is usually necessary to provide some parameters to the ./configure script:

There is also a simplified port installation script in patches/ports that allows automatically downloads, patches and installs some third-party libraries.

You can create a bootable USB stick with the following steps.